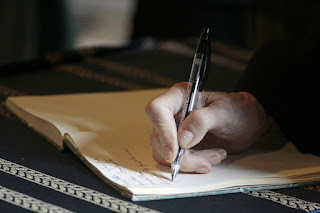 Well, it is a joy and a comfort to be back in the "blogging chair" again.  My blogging had been somewhat hindered by my personal journey through some deep waters recently.  What they were (and are) is not cogent to our interaction here at RDM (Resplendent Daughter Ministries).  At any rate, I have been unable to be with you for a few days, and I have missed our time together.

Another factor in my absence has been my reluctance to delve with you into the book of Hebrews. This has had to do with the fact I find the book extremely "deep" and intimidating. Years ago, when our boys were young, and living at home, we had family devotions together most nights.  One of the last books I read through with them was Hebrews.  What a mistake!  They had not the slightest idea what the book was about (and I was nearly as flummoxed as were they....)

However, I have now armed myself with some commentaries which I am sure will be helpful; and, being so armed, I am very excited to begin this study.  I expect to learn a great deal about this wonderful book.  (Hopefully, you do too!) We will be in Hebrews for some several months, I expect.

As for the commentaries, my blog is not a "scholarly work".  So, I am not going to wear myself out with references.  I'll list the sources I consult in my "Sources" section, as I customarily do in my posts, along with the relevant page numbers.  If you are inspired to dig further, feel free.  If you will look at the sources for today's post, I will list for you the commentaries I plan to use in my study of the book of Hebrews, in the days ahead.

The first question that almost always arises about this book is, "So, who wrote it?"  There is good reason for this question; it inspires many opinions.  My answer is (and I'm in good company here):
"I don't know."  Let's explore this conundrum a bit.  The question has been asked for centuries.

Many Bible scholars believe that the apostle Paul wrote the book, but other "contenders" for that honor are:  Luke, Clement of Rome (a first century student of the apostles Peter and Paul), or Barnabas (Paul's co-laborer and co-missionary) or Apollos (a first century preacher prominent in Ephesus and Corinth).  The author does not claim to be an apostle, or the authority of an apostle, which would seem to indicate he was not one.  Hebrews 2:3 states that the author had received the gospel from "those who heard" the Lord Jesus.

It was of interest to me to learn that Martin Luther argued for Apollos as the author of Hebrews, due to the description of him in Acts 18:24-19:1.  The passage describes Apollos as a powerful preacher, highly educated and with a deep love for his flock.  These attributes fit well the writer of Hebrews.

Despite the inability to conclusively determine it's authorship, Hebrews was always valued for inclusion in the biblical canon by all of the early church councils, despite their obsession with including into the canon only those works written by men who had had direct contact with the risen Jesus.  That is, there has never been any doubt as to whether or not it should be included in our "Bible".  The reason for this is that it stands alone as a "masterwork" of Scripture.

The book of Hebrews, rather than being akin to the somewhat intimate letters of Paul, is a intricate creation of a brilliant theological mind.  It takes the form of a sermon, rather than a letter (although in chapter 13 there are some "letter-ish" closing remarks).  For this reason, Cockerill, in his commentary, refers to the author as "the pastor".  The book is first mentioned when it was quoted by Clement of Rome in his epistle of 1 Clement, around the end of the first century.  It is also quoted by such second century church leaders as Origen, Polycarp, Irenaeus, Tertullian, Hippolytus and Gaius.

The writer of Hebrews was an Old Testament scholar of tremendous merit.  He was also well-versed in Greek...not the conversational Greek, but the scholarly Greek that was only mastered by the highly-educated.  Hebrews uses 169 Greek words which appear nowhere else in the New Testament. Both the theological content and the literary form of the sermon have been so intricately wed, they cannot be separated from each other.

In the original Greek (so I am told, lol!), the book reads like an oral sermon, beautifully blending exposition and exhortation.  It features grandly-constructed sentences, alliteration, wordplays, internal rhyme, metaphors and evidences of rhetorical argument. It is the finest example in the New Testament of a sermon which might have been given in a early Church "Christian synagogue".

I hope our journey through Hebrews will excite, intrigue, challenge and delight you.  (Today's source was exclusively the Cockerill, Introduction, sections IA and IB.)

Father, regardless of who wrote Hebrews, thank you for giving us this tremendous book of Scripture! Please teach us truths which will help us to grow deeper in our faith and will make us even more effective for Your kingdom!  In Jesus' name, amen.