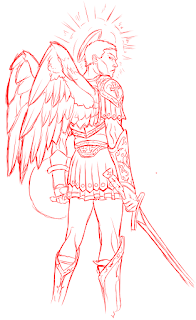 There is a lot of "lore", shall we say, out there concerning the nature of angels.  I say, "lore", because most of it is extra-biblical, fanciful and just plain untrue...the stuff of fairy tales.  Movies have been made about angels, books written, as people have tried to transform the truth of these spirit beings into a more pleasing fiction.

Here, in the first chapter of Hebrews, the writer expounds extensively on the incomparable differences between angels and the only begotten Son of God, Jesus Christ.  In so doing, we find these two verses that give us insight into the nature of angels, these created spirit beings.

7Of the angels he says,


“He makes his angels winds,
and his ministers a flame of fire.”


13And to which of the angels has he ever said,
“Sit at my right hand
until I make your enemies a footstool for your feet”?

14Are they not all ministering spirits sent out to serve for the sake of those who are to inherit salvation?

In fairy tales, there is the character the "shape-shifter".  This mythical being has the ability to change his or her physical shape into anything he or she so desires.  Myths often have a small root somewhere in reality, and this one may have sprung from the reality of angels, who are directed by God to appear in our mortal world in various forms.  Fortunately, in the Scriptures, angels are mentioned at least 108 times in the Old Testament and 165 in the New.  So, there is ample information from the most trusted source, to well-inform us!

Here, in Hebrews, as earlier in Psalm 104, the scriptures testify that they appear most often like the wind (a common Biblical euphemism for "spirit") or at other times as "flames of fire".  In other words, we are most often unable to detect them with our human capabilities.  We find angels at other places in the Bible taking on human likenesses when they appear to humans on earth, in the likeness of grown men. Here are some of those:

The Bible also describes special classes of angels, who have visible characteristics suited to their purposes.  These include the seraphim (Isaiah 6), cherubim (Ezekiel 1) and archangels (Daniel 10:19, Jude 9).

Functions of Angels:
Well, I'm out of time, and don't want to or need to do an angel dissertation!  Here's a helpful website I was using for this post, if you want to delve into this topic further.  Basically, angels minister to humans in a variety of ways, at God's direction, including at times delivering His messages.
http://christiananswers.net/q-acb/acb-t005.html

Father, thank you for how you direct your ministering spirits to intervene in our lives.  In Jesus' name, amen.