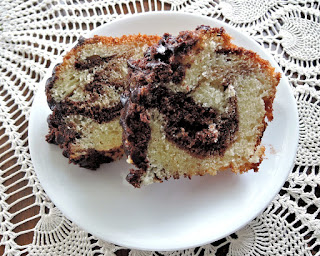 While browsing on a friend's site this morning I was reminded of an anecdote from my past I thought I'd use in today's post.

Once my first cousin,Clayton, was coming over for dinner. I was young and single, living in an apartment alone and not the most accomplished cook at that point. I had decided to make a bundt-type of cake for dessert. The problem was: at the last minute I discovered the only bundt pan I owned was a microwave bundt pan! At this point, I already had the batter made and ready for the pan. And, he was going to arrive in about a half hour. I figured there was nothing to do but to try to bake this thing in the microwave. So, I nuked it for several minutes. When it came out, I thought with great relief, "SUCCESS!" It looked AWESOME! When Clayton arrived, we laughed about the whole thing....until I cut the cake, which by now had begun to sort of....sink. Yep, you guessed it! What looked pretty on the outside was doughy and yucky on the inside with a crunchy, inedible crust on the outside.  What mortification!!

Now, where did this whole thing go wrong?


Of course, there are life lessons to be learned here.  There are times in life when we find ourselves "in a pickle".  Sometimes, that pickle is of our own making (as was the case with my cake fail).  Other times, it is not.  Regardless, we have to choose how to proceed.  There are usually two choices:  the right one and at least one wrong one.

The "wrong way" seems oh, so seductive!  "It won't matter if I compromise my values just this once!"
When we choose wrong methodology, we always end up with unsatisfactory results.  Even when things "look good" or it seems we've "gotten away with it", we never do.
We can do a whole series of "rights", but if we finish with a "wrong" the whole cake can fall (and often does).


There is a way that seems right to a person, but its end is the way that leads to death.
Proverbs 14:12 (NET)

The right thing, done the wrong way, leads to a bad end.
Or,
It is never right to do wrong, in order to get a chance to do right.

All true words of wisdom, no matter how you slice it!  ;)

Father, You have shown us by Your Word how to live.  The problem is we often don't want to live according to Your precepts.  We fall for the devil's "work-arounds", "short-cuts" and other deceptions because they appeal to our sinful natures.  Keep us, Lord, walking in paths of obedience, truth and wisdom, as we seek to walk...resplendent!  In Jesus' name, amen.