One of the many, great paradoxes of the Bible is that the only wise God, the omnipotent, omniscient God is also the God of the Minor. 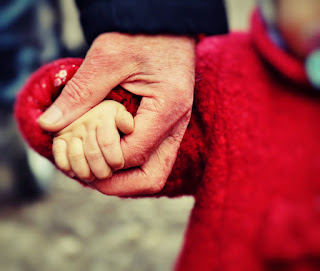 I am so glad that He is concerned with, what on the world scale, must be considered "minor incidents" or "the little people".  I am so glad that He chooses "minor characters" to become the heroes in history ("His Story").  If He can choose and use Zechariah and Elizabeth, He can use anyone.  Their story is found in Luke 1:6-17.

Zechariah and Elizabeth, both of the Levitical tribe, that is, both descendants of Aaron, were (beyond that) just an ordinary, old couple.  Most folks paid them little attention, I'd guess.  In a society where most things centered on the large, extended family, this old couple had none.  This is because, while they should have been at least grandparents and perhaps great-grandparents, they had no offspring, no descendants.  They were pretty much alone.  To their credit, we read in verse 6 that, despite what had to be this deep disappointment, they continued to honor God with their lives.  Two ordinary, old people whom God chose to play a leading role in mankind's redemption story, not in their timeframe, but in His.

At the beginning of the A.D. era there were approximately 7000 Levitical priests serving at the Jerusalem temple.  These were laymen, who only served there two weeks out of the year.  One of Zechariah's "weeks" fell during the feast of Yom Kippur, during the year in which this story is set. Of the hundreds of priests serving that week, Zechariah's name was drawn "at random" to go into the most holy place of the Temple ("the Holy of Holies") and make an incense offering.  This was a very rare honor.  Most priests like Zechariah would live all of their lives without having their name drawn. You might say he "won the lottery".  Then, if that were not miraculous or unlikely enough, he sees an angel, who delivers to him a miraculous message.

It is very significant that there had been no "word" from God since the book of Malachi was written, 400 years earlier.  There had been no recorded angelic appearances, no prophets. Don't be fooled, though.  God was not idle, even if He was "silent".  I am sure that many had decided that Jehovah's dealings with the Jews were "ancient history" and irrelevant to "modern people".  Not Zechariah or Elizabeth, however.  Their faith had not wavered.  What an inspiration they are!

Even so, when Zechariah saw the angel Gabriel and heard his message, his faith wavered.  Who can blame him?  Certainly not me!  (Most likely I would have pulled a "Sarah", and laughed.)  At any rate, Zechariah (whose name means "God Remembers") and his wife Elizabeth (whose name means "My God Keeps His Word") conceived and birthed that promised son.  And, Zechariah, who had been struck mute in the most holy place, found his tongue freed to praise the King of Kings and Lord of Lords when asked about the name of his newborn boy.  John - - - an unusual, one-of-a-kind name - - for an unusual, chosen boy.  This boy was filled with God's spirit while still in his mother's womb, causing him to leap for joy there when he heard the voice of His Savior's mother for the first time. God is sovereign, faithful and good.

In today's picture the old woman's hand holds the hand of her toddler son.  There are no "unlikelies" with my God.  Nothing is minor to Him.  You may be praying, as I am, for a Christmas miracle this season.  Keep praying.  God is listening.  He bends down to hear the whispered prayer of the broken, the anguished, the weary.  Keep praying.  He longs to give us not only our needs, but the desires of our hearts.

Oh Lord, Seer of All Hearts, You know our needs.  And, You know our deepest desires.  Your grace begins with giving us more of You, and Your blessings flow from that priceless gift.  None of us, none of our needs are either minor or unlikely.  Thank you for meeting them in the most unlikely of ways.  I love You, Lord, and praise You for Your goodness.  In Jesus' name, amen.

Email ThisBlogThis!Share to TwitterShare to FacebookShare to Pinterest
Labels: Luk 1:6-17