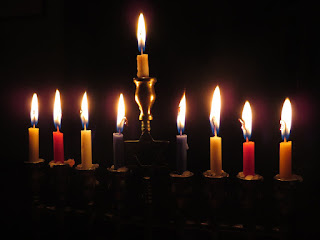 Wait!  Hanukkah has hijacked the Advent posts!  LOL, no, not really.

What you know about Hanukkah?  Here's what most Christians know:


That's what most Christians "know".
But, on this third night of Hanukkah, 2018, let's look a little deeper, fellow believers in Jesus!

Hanukkah is a Jewish festival/holiday, recorded in the New Testament.
We find a brief mention of it in John 10:22-24


22Then came the Festival of Dedication b at Jerusalem. It was winter, 23and Jesus was in the temple courts walking in Solomon’s Colonnade. 24The Jews who were there gathered around him, saying, “How long will you keep us in suspense? If you are the Messiah, tell us plainly.”

Jesus was at Solomon's Colonnade, a part of the Temple, during the Feast of Dedication, a national holiday in first century A.D.
The Festival of Dedication was actually a celebration commemorating the RE-dedication of the 2nd Temple about 200 years earlier.  It's a fascinating story.

Waaaaaay back in the book of Daniel, the prophet predicted (chapter 11) with startling accuracy middle eastern history that would occur 350-400 years later.  It's amazing, but I'm not going to go into all the history of Daniel 11 in this post.  (Maybe one day I'll exegete Daniel...if I ever get through Genesis...)

More to the point, Daniel 11:21-35 prophesied a ruler would do the following:


31“His armed forces will rise up to desecrate the temple fortress and will abolish the daily sacrifice. Then they will set up the abomination that causes desolation. 32With flattery he will corrupt those who have violated the covenant, but the people who know their God will firmly resist him.

This prophecy is a double prophecy, meaning it had a nearer fulfillment and it also will have a second, future, fulfillment.  (I'll touch on the future fulfillment at the end of the post.)

The first time this prophecy was fulfilled occurred in 175 B.C., when Antiochus IV Epiphanes came to power.  A member of the Seleucid dynasty of Greek-Syrian rulers over Judea, Epiphanes was particularly evil and brutal.  The name "Epiphanes" means "God Manifest".  He thought of himself as a god to be worshipped.  Accordingly, he stopped the Jewish Temple sacrifices and set up an idol to Zeus in the holiest place.  To top it all off, he sacrificed a pig on the altar.  This latter was "the abomination that causes desolation".

Now, look at the last phrase of verse 32..."the people who know their God will firmly resist him."
Most of the rebellions against the Romans during the time Rome ruled Judea came from the Galilee area.
In the small, rural village of Galilee called Modein, a seemingly insignificant priest lived with his five sons.  In 167 B.C., the Seleucid king sent soldiers to Modein to force the Jews to sacrifice to idols.  Although elderly, this priest refused to perform the sacrifices and killed the soldiers sent.  Then, he, Mattathias, and his five sons and a number of their followers fled to form a guerrilla army.  They began to be called the Maccabees, a nickname that means "hammerer" because, in battle after battle, they hammered their enemies into the ground.  If those victories were not miraculous enough, the crux of the Hanukkah miracles began at Emmaus.

Epiphanes had greatly underestimated the strength of the rebellion.  He decided to deal the Jews a death blow, to get rid of the Jews once and for all.  He sent 60,000 soldiers to Emmaus, where they fought the Maccabean army of 10,000 and were soundly defeated by them.  Afterwards, the Maccabeans marched into Jerusalem and purged the Temple of the desecration Epiphanes had instituted.  In so doing, only one night's worth of holy oil (to keep the Temple lamps perpetually burning) was found, and it would take a week to get more.  Miraculously (another miracle), the one night's worth of oil kept burning for 7 additional nights!  Then, the Temple was re-dedicated.  The Jews enjoyed several decades of peace afterwards, until the Romans conquered the land of Judah.

Hanukkah is a time for celebrating God's miracles, which is why Jesus went on in John 10:24 and following to speak of the many miracle He had done, citing them as proof He was indeed the long-awaited Messiah.  Because of the miracle of the oil continuing to burn in the Temple, Hanukkah is often called the Festival of Lights.  Elsewhere in John, (8:12), Jesus correctly told His followers that He is the Light of the World.
Today, both Jews and (some) Christians celebrate Hanukkah, although not all Christians are aware of the festival's significance.

Should Christians celebrate Hanukkah (or the other Jewish holy convocations/feasts?) . Every Christian should live out his or her faith as the Holy Spirit directs and leads.  However, according to the New Testament, we are under no law to do so.
Jesus was a Torah-observant Jewish man.  He righteously observed all the Hebrew Bible's directives for Jewish men of His day.  However, it is clear from the writings of Peter and Paul that Gentile believers are not obligated to do the same.
Some of my good friends, Christian friends, do observe Hanukkah and the other holy days.  They do so always worshipping and magnifying Jesus Christ, their Savior.  For example, in their Hanukkah celebrations, they rejoice in the truth that Jesus IS God's true Light, already come into the world, bringing eternal life.  They also worship regularly with elements of Judaism in their worship services (Messianic Synagogues) and in their daily living, revering the Jewish roots of our Christian faith.  For a good explanation of this melding, peruse this link:  https://www.torahclass.com/what-we-believe

Christians can focus and meditate on major themes of the Hanukkah celebration, such as:


I hope you have found this explanation of Hanukkah interesting and informative.  My prayer is that a deeper understanding of this history of the Jewish faith will enhance your Advent.
Happy Hanukkah!  (Class dismissed!)

"Extra Credit" - - the future fulfillment of the verses quoted from Daniel 11 will be by the Antichrist, when he violates his agreement with the Jews of Israel in the middle of the Tribulation period by erecting a statue of himself in the "3rd Temple" (the future one that will be built), and demanding that Jews worship him as God.