The Authoritative Guide to Advent 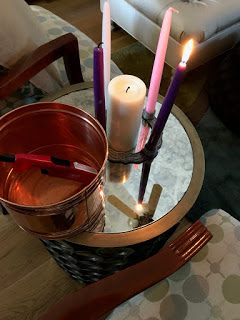 You may be surprised to learn that the season of Advent is not "in the Bible."
The 1st century Church did not celebrate it.
In fact, the first mention of Advent1 was not until 380 A.D., at a meeting of church leaders in Spain, called the Council of Sargossa (a council I'd never heard of, actually).
The Advent Wreath was created by a German Lutheran minister who worked at a children's mission, but this was not until 1839.  He created the wreath to teach the children the deeper meanings of the Christmas season.
I'm glad he did.
Children are at the heart of Advent celebrations because it is so important they are taught "the true Reason for the season".  In teaching them, we adults remind our own hearts as well.

If you are interested, below are the most commonly-held representations of the five candles in an Advent wreath: (from Crosswalk.com)

I've confessed before in this blog, and to friends, that it is hard for me to like the Christmas season.  The reasons for that are many, but the main one is this: I feel Jesus sort of gets lost in all the falderal (or the fa la la la la, if you prefer, lol!)

All the "noise" makes my Christmas wonder....wander off...

That is why this Baptist likes to celebrate Advent, like the more liturgical denominations do.  It helps me to "keep the main thing (Person) the main thing".

I still can't figure out who the Advent Guru is.
In other words, here's the actual deal - - -
Different denominations roll out the Advent season each year differently.
Spoiler Alert!  There IS no "authoritative guide to Advent", from denomination to denomination.

In the four Sundays leading up to Christmas Eve....
Various churches focus on Scripture passages about Jesus, BUT there are no prescribed ones that are uniform across denominations2, such as is the case with Judaism's prescribed "Torah Portion" for each week.  See, I find the latter very comforting - - that in any Jewish (or Messianic Jewish) congregation every week the SAME portion of the Torah is read in each and every one!  That's orderly and dependable.

So, back to those Advent passages - - - who gets to decide which scriptures about Jesus' first and second coming are selected for use each Sunday?
Again, this varies by denomination.
On the other hand, there are so many prophetic passages which Jesus Christ either fulfilled in His first coming or will fulfill in His second coming, four weeks is not nearly enough time to celebrate them all.  This openness to celebrate some but not others allows for the Holy Spirit to move and lead as He sees fit, I reckon.

Here are the most important things about the four Sundays and the days leading up to Advent:
...that we prepare our hearts to remember and celebrate Jesus' birth
...that we quiet ourselves to remember the beauty and grace of our Savior, how He laid aside His glory to enter our dark, sinful world
...that even now He is the only One who can restore to the human heart hope, light and peace.

He had equal status with God but didn’t think so much of himself that he had to cling to the advantages of that status no matter what. Not at all. When the time came, he set aside the privileges of deity and took on the status of a slave, became human! Having become human, he stayed human. It was an incredibly humbling process. He didn’t claim special privileges. Instead, he lived a selfless, obedient life and then died a selfless, obedient death—and the worst kind of death at that—a crucifixion.
9-11 Because of that obedience, God lifted him high and honored him far beyond anyone or anything, ever, so that all created beings in heaven and on earth—even those long ago dead and buried—will bow in worship before this Jesus Christ, and call out in praise that he is the Master of all, to the glorious honor of God the Father.

So, grab (download?) an Advent book.
Dig out your wreath and candles.
Go find your Jesse Tree or your Advent calendar.
Go to church in the morning and celebrate the first Sunday of Advent.  (Maybe your pastor will be preaching from Isaiah, as mine will!)

Do what you need to do to get ready so that, in a few short weeks, your heart will kneel in wonder at the manger.  O come....let us adore Him!