Repentance and the Book of Life 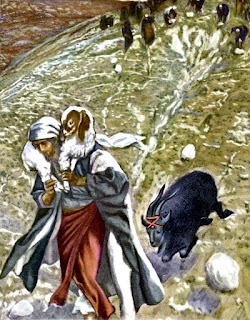 Today is Yom Kippur, year 5779, on the Jewish calendar, a day of repentance and fasting which culminates the 10 days of introspection and reflection ushered in by Rosh Hashanah, the Jewish New Year.  Jews believe that there is a Book of Life, and that on Yom Kippur they are judged by their actions done during the year just ended.  And, if their prior actions merit it, their name is written into the Book of Life for another year.  There is a saying, "and on Yom Kippur it is sealed".  You'd better make sure your name is there before Yom Kippur ends, before the book is closed.1  We'll return to this thread of thought momentarily.


1Now Adam knew Eve his wife, and she conceived and bore Cain, saying, “I have gottena a man with the help of the LORD.” 2And again, she bore his brother Abel. Now Abel was a keeper of sheep, and Cain a worker of the ground. 3In the course of time Cain brought to the LORD an offering of the fruit of the ground, 4and Abel also brought of the firstborn of his flock and of their fat portions. And the LORDhad regard for Abel and his offering, 5but for Cain and his offering he had no regard. So Cain was very angry, and his face fell. 6The LORD said to Cain, “Why are you angry, and why has your face fallen? 7If you do well, will you not be accepted?b And if you do not do well, sin is crouching at the door. Its desire is contrary toc you, but you must rule over it.”
8Cain spoke to Abel his brother.d And when they were in the field, Cain rose up against his brother Abel and killed him. 9Then the LORD said to Cain, “Where is Abel your brother?” He said, “I do not know; am I my brother’s keeper?” 10And the LORD said, “What have you done? The voice of your brother’s blood is crying to me from the ground.
Genesis 4:1-10 (ESV)

Adam and Eve had many children, according to Genesis 5:4, but it appears Cain and Abel were the first.  When Eve gave birth to Cain, she thought (according to many commentators) that she had birthed the Messianic "seed" who would crush the power of the serpent, of sin.  This is reflected in Cain's name (Hebrew: "Kayin"), which means "my lance" or "my strong weapon".  Interestingly, Abel's name means "vanity" or "insignificant".  It appears Cain was viewed by Eve as the favored son, of the two, if you judge only by the name.
Speaking of names, Eve uses the name Jehovah (Yahweh) for the LORD in verse 2.  If ever a woman had reason to fear the act of childbirth, it was Eve.  She had been foretold it would be painful.  Any woman who has given birth the first time can attest to being tempted by fear as the time of delivery approaches.  Eve, you remember, had no midwife or role model to help her.  Therefore, the LORD Himself helped her.  Whether the Angel of the Lord appeared in the form of pre-incarnate Christ or not is unknown.  But, here, in verse 2, she credits Jehovah with His help, which was surely significant help, at that.
This is the first time the name Jehovah is applied to God.  In her conversation with the serpent in Genesis 2, Eve used the name Elohim for God.  Barnes, in his commentary, notes:
She also employs a new and near name to designate her maker. In the dialogue with the tempter she had used the word God אלהים 'ĕlohı̂ym. But now she adopts Yahweh. In this one word she hides a treasure of comfort. "He is true to his promise. He has not forgotten me. He is with me now again. He will never leave me nor forsake me. He will give me the victory." And who can blame her if she verily expected that this would be the promised deliverer who should bruise the serpent's head? 2

Needless to say, Eve was sorely disappointed.  Cain did not become the promised Deliver, nor even the progenitor of Messiah, who came through the line of Seth.  Eve was the first woman to try to jump ahead of God's perfect timing, but she certainly was not the last.  Nor was she the last mother to grieve over contention between her children.

Why did Cain kill Abel, in one of the darkest biblical stories?3  Why was his offering not acceptable to the Lord?  Let's explore that, now...the first recorded act of worship.

It can be inferred from Scripture that God had previously instructed the two sons of Adam and Eve as to how to make acceptable worship.  God is imminently fair and would not "pull a gotcha" on anyone.  Even after Cain made his unacceptable offering, he was given a Mulligan (that is, a chance to "do over").  Because he harbored evil in his heart, however, Cain rejected that second chance.  God stated that evil was "crouching at the door" of Cain's heart, waiting to have him.  Sadly, Cain gave in to that evil, instead of repenting and fighting that evil through the power of Jehovah God, as evidenced by his cold-blooded, premeditated murder of his brother.

God had previously prescribed that the sacrifice be a blood sacrifice.  This is why Abel's burnt offering of one of his flock was acceptable to God, while Cain's offering of plant-life was not.  There is no worship, no sacrificial offering apart from blood.  Even today, while we no longer offer burnt offerings or even blood offerings, Christians come to worship God under the scrim of the holy, redemptive blood of Jesus Christ.  Jesus Himself declared that He is "the way, the truth, the life" - - and that "no man comes unto the Father except through me"  (John 14:6).

Cain was merely the first, but in the intervening millennia people have continued to construct their own forms of repentance, their own ways of redemption, their own false ways of worship, their own views of the Book of Life.  I think with sorrow today, of all the observant Jews around the world who are fasting and praying to "earn" a spot for their name in this very real book, now seated in Heaven with God.  How futile their own misguided efforts, even though sincerely offered!  (For the sake of time, I won't delve more deeply into the Book of Life in this post.  See Source #4 below to learn more.)

Let me tell you what happened on Yom Kippur, in the days when Temple sacrifices were still ongoing.  The name "Yom Kippur" comes from Leviticus 16, where God commands this holy convocation.  The name means Day of Atonement.  On this most holy day, the high priest would select a goat (the "scapegoat") and, in a special ceremony, place his hands on the goat's head, thereby transferring all the collective sins of the people of Israel onto this one animal.  Then, the goat would be sent outside the community's boundaries, outside the "city walls", you might say, carrying the sins of the people into the wilderness, never again to be seen.  Through this ceremony, God covered the sins of His repentant people. (Remember, "atonement" means "covering".)  The acceptable sacrifice of Abel, all the OT animal sacrifices, foreshadow the ultimate blood sacrifice made for believers by the one and only Savior.

In the marvelous New Testament book of Hebrews, the gifted writer draws parallels between Yom Kippur and the death of Jesus Christ (Hebrews 9:6-28 and 13:11-13).   As the "scapegoat" bore the sins of the people, so did Christ.  As the scapegoat was "sent outside the camp", so was Christ crucified outside the city walls.  "He bore our sins in His body on the tree...." (Isaiah 53:5-6, 1 Peter 2:24), and in so doing, He made unnecessary forever the Old Testament sacrificial system.

He IS our scapegoat.
Repentance and forgiveness of sins are only possible through Jesus Christ, Yeshua HaMashiach, whose one sacrifice is sufficient to not only cover the sins of those who believe in Him, but to render believers thoroughly "justified" - - fully restored, just as if we had never sinned.  What glory!  What miraculous grace!

As Christians, we should always be mindfully repentant of the sins we commit, in the spirit of Yom Kippur, and eternally grateful for our Savior, our merciful God, who has taken all our sins forever away.