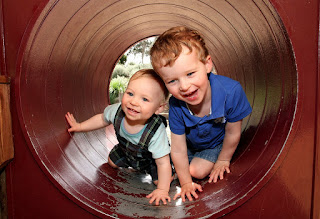 Aren't you, like me, fascinated by these modern stories of siblings, through these DNA test kits, finding long-lost brothers and sisters?  I watched one the other day.  It was astounding how much the two brothers looked alike.  One lived in France, and the other in Greenville, SC, America.  A mother's deathbed confession led to the beginning of a search which, through the DNA kit, yielded a successful, heart-warming outcome.  Now, the brothers are making up for lost decades.  Lives forever changed - - how wonderful!
https://www.france24.com/en/video/20180925-incredible-story-two-brothers-reunited-after-dna-test-age-72-64

I think it would be an interesting sermon series to focus on questions asked in the Bible.  For example, a few posts ago, near the beginning of this Genesis series, we examined "Did God really say...?"  Here, in Genesis 4:9-10, we have another question asked, this one by Cain, after he had murdered his brother, Abel.  Closely following Cain's question is a rhetorical question (because He already knew the answer, of course) from God.


9Then the LORD said to Cain, “Where is Abel your brother?” He said, “I do not know; am I my brother’s keeper?” 10And the LORD said, “What have you done? The voice of your brother’s blood is crying to me from the ground.
Genesis 4:9-10 (ESV)

What a truly astounding, horrific moment!  The Bible does a bang-up job of showing us just how depraved sinful mankind is, apart from the only salvation God offers us through Jesus Christ.

So, let's first examine this concept of Abel's blood crying to God from the ground.  That's totally beyond human comprehension, in my book.  Here, Abel's blood is described by God as having a "voice".  The Bible records no spoken words of Abel's.  Yet, his blood speaks....

Think of the implications.  Not one thing in this universe escapes God's notice.  All the devastating losses we experience in life, even the sudden death of a loved one by evil means, are seen by our all-knowing, all-powerful God, who promises to avenge innocent blood, whether we "live to see it" or not.

Think of all the murders, committed throughout time.  The blood of each of those victims "cries to God from the ground".  All the aborted babies, excused by their mothers as "my body, my right" (one of Satan's most potent, destructive lies) . . . their blood cries out to God.

Numbers 35:33 (AMP) says that such violently-spilled blood "pollutes and defiles the land".

In Gen. 4:10, the word "blood" is actually plural - - "bloods".1  When a plural is used in this fashion, it connotes intensity, or more specifically, a violent shedding of blood.  We see this similar plural usage in Isaiah 4:4, 26:21 and Hosea 1:4.  The Hebrew word for "crying" is "tsa-aq", which means "a most desperate, extreme need."

The Amplified Bible puts this verse (4:10) as follows:


The voice of your brother’s [innocent] blood is crying out to Me from the ground [for justice].

What does God do, then, in response?  He puts a severe curse on Cain.  Murder became Cain's legacy and his curse; this heinous act against his brother followed him the rest of his life.  Even more - - we see the curse in the lives of his descendants.  In Genesis 4:23-24 we see that Cain's great-great-great-grandson, Lamech, was also a violent person, who murdered a young man for striking and wounding him and then dared others to hold him accountable for his murderous actions.  The "apple did not fall far from the tree..."

The Bible tells how violence began to fill the land (Gen. 6:11), as Cain's curse began to play out and expand, until the earth became so violent and the ground so polluted by blood, as well as the human line so polluted by angel-intermarriage, God had to send the Great Flood to cleanse the earth - - effectively, a re-boot.

Now, let's consider Cain's response to God asking him what he had done...."Am I my brother's keeper?"

The Bible is replete with stories about brothers who cannot get along with each other.  They share the same bloodlines, but cannot live in peace with or respect for one another.  Many of us have witnessed such division in our own families, with such anger, strife and sometimes outright hatred, hearts are badly broken, lives destroyed.  In the Bible, there were other brothers who killed each other for personal gain.  King David's sons come to mind.....


25And behold, a lawyer stood up to put him to the test, saying, “Teacher, what shall I do to inherit eternal life?” 26He said to him, “What is written in the Law? How do you read it?” 27And he answered, “You shall love the Lord your God with all your heart and with all your soul and with all your strength and with all your mind, and your neighbor as yourself.” 28And he said to him, “You have answered correctly; do this, and you will live.”
29But he, desiring to justify himself, said to Jesus, “And who is my neighbor?” 30Jesus replied, “A man was going down from Jerusalem to Jericho, and he fell among robbers, who stripped him and beat him and departed, leaving him half dead. 31Now by chance a priest was going down that road, and when he saw him he passed by on the other side. 32So likewise a Levite, when he came to the place and saw him, passed by on the other side. 33But a Samaritan, as he journeyed, came to where he was, and when he saw him, he had compassion. 34He went to him and bound up his wounds, pouring on oil and wine. Then he set him on his own animal and brought him to an inn and took care of him. 35And the next day he took out two denariic and gave them to the innkeeper, saying, ‘Take care of him, and whatever more you spend, I will repay you when I come back.’ 36Which of these three, do you think, proved to be a neighbor to the man who fell among the robbers?” 37He said, “The one who showed him mercy.” And Jesus said to him, “You go, and do likewise.”

When Jesus asked the lawyer what the Law said about "how to get to Heaven", the man quoted The Shema, which is the foundational statement of all Judaism.  It is found in Deuteronomy 6:5-9.  Traditionally, these verses are recited at the end of the most climactic prayer on Yom Kippur, which I mentioned in the last post, and also just before a person's death.2  These words are considered most holy to Jews.  So, this was the lawyer's response, a very good one, considering.  But, then, seeking to justify his neglect of his fellow man, the lawyer asked, "And, who is my neighbor?"  In other words ... Just how selfless must I be?  How much of a loving, servant's heart must I have?

To answer the lawyer, Jesus gave us the teaching story (parable) of The Good Samaritan.
It was no accident Jesus used a Samaritan as the hero of this parable, because Samaritans were hated in the Jewish culture of the day.  I mean, they were considered "the lowest of the low".  Yet, we see this Samaritan treat a total stranger with utter mercy, concern, generosity, even love, with no expectation of reciprocation.  This was after two other "would-be heroes", both much more likely, failed the test (a Levite and a priest).

We are surrounded today by the wounded, by those our brothers, who have "fallen among robbers".  "Robbers" can be any sort of adverse life circumstance, whether the person brought it on him/herself or whether he/she was a victim of others' sins.3
What should be our response to "the walking wounded"?  Jesus says we should extend compassion and mercy and should help them.  Within the context of lawfulness, we should selflessly throw them a lifeline.  We should "rescue the perishing" and "care for the dying".

Are we our brother's keepers?  Yes.  Yes, we are.  May God help us, the Holy Spirit within us empower us, to "go and do likewise."