Eve, Mother of All the Living 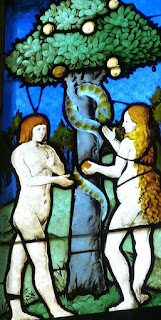 This weekend I was privileged to spend some quality time with my older son and his girlfriend, just talking and enjoying each other's company.  He likes to debate with me on both theological and political topics.  Coincidentally, he brought up the topic of evolution on this occasion.  I thought that odd, since here in the blog, I'm in Genesis.  A key point I made was this:  if Genesis is discredited as mere allegory or fanciful tale, then the gospel of Jesus Christ, especially His death, burial and glorious resurrection, are at risk for similar treatment.  As case in point, I shared with Son1 that the first appearance of, the first allusion to, the gospel is found in Genesis 3:15 (see previous post).

This morning, we are going to look at the immediate aftermath of the Fall and will specifically focus on one word.  The text is Genesis 3:16-20, particularly verse 20.

The effects of sin began to be immediately apparent.  The word "sin" is synonymous with "death".  As soon as Adam and Eve disobeyed God, they became spiritually dead in the bondage of sin.  Also, their bodies began to die physically.  It was not the "forbidden fruit" that brought death; there was nothing intrinsically harmful in that appealing food.  It was the disobedience, the lack of faith in God's spoken word to them, which separated them from God.

The first effect of the sin curse mentioned by God pertained to Eve, since she was the first to sin (vs. 16).  It concerned the act of childbirth, which was not originally meant to be a painful experience apparently.


He said to the woman: I will intensify your labor pains; you will bear children in anguish. Your desire will be for your husband, yet he will rule over you.
Genesis 3:16 (HCSB)

This is such an interesting verse.  The first part is not mysterious at all, at least not to any woman who has given birth.  Further, God here established the order of godly marriage, giving the husband the dominion, the leadership, of the home. The second part of the verse, though, concerning "your desire will be for your husband" . . . various translations either translate "desire" to be either sexual desire, or a general desire for a husband, or a desire to control one's husband.  The actual Hebrew תְּשׁ֣וּקָתֵ֔ךְ  (tə-šū-qā-ṯêḵ), only appears once in Scripture.1  That tells me it is a complex concept of desire, and thus the variances in translations.

Then, He turned to Adam and pronounced a curse over the whole earth, as a result of his disobedience.  This is why the entire creation is "groaning", as described in Romans 8:18-22.2  Genesis 3:19 highlights the fact that man was created by God, Who assimilated and transformed elements found in the newly-created and pristine Earth to form our physical bodies.  Mankind was not originally intended to die physically; but, since that inevitable conclusion is the result of The Fall, our bodies after physical death return to the "dust" from which they were formed.

And now, perhaps the most fascinating verse in this passage, verse 20.

Critics of Genesis claim the impossibility of one couple, The First Couple, producing enough offspring to populate the Earth.  I blogged about this a few weeks ago, earlier in this Genesis study, and am not going to "plow the row over" (as my mother would say) here.  You can find the link3 in Sources, below.

But, I want you to notice one word particularly in verse 20, and that is the word "all":


The man named his wife Eve, because she was the mother of all the living.
Genesis 3:20 (NET)

The "Mother of ALL the Living".... not the mother of some, or not some "representative, allegorical mother", but the "Mother of ALL Living".  Do you think it is an accident the word "all" was used here?  I do not.  There are no "accidents" in the Word of God.  Every word is divinely inspired and supernaturally appointed.  The Hebrew word here, כָּל־ ,is clear.  It is variously translated, "the whole", "every" and "all".  The name, Eve, means in Hebrew "Life".

Here's how beautiful the redemptive plan of our all-wise God is:
Eve received her name, Life, before The Fall.  Yet, God used the one who first caused The Fall to also be the vessel from whom Life, even in the generations of her descendants, Life Everlasting, the Messiah, would spring.  Matthew Henry comments, "Adam bears the name of the dying body, Eve of the living soul."4

4    https://biblehub.com/commentaries/mhc/genesis/3.htm
Posted by Gena Hood at 4:50 AM