Sarah Was a Looker, and Abraham a Liar (Genesis 20) 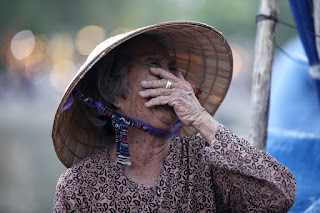 The Bible never shies away from telling the truth about its heroes and heroines, of which Abraham and Sarah are most certainly two - - despite the somewhat disparaging title of this post.

Things were certainly very different in the human genome before the Great Flood, and still somewhat different 4000 years ago (the time of Abraham).  People lived longer.  They were able to procreate longer (somewhat) and they retained their vitality much longer (case in point - - Abraham was around 90 years old when he sallied forth to rescue Lot.)

Genesis 20 relates these facts, in the context of a strange tale.  Even at 90 years of age, Sarah was so beautiful the King of Gerar, Abimelech, sought her out to make her one of his wives.  This incident records the SECOND time Abraham "stretched the truth" about his relationship to Sarah.  (See also Genesis 12:12-20.)  Sarah WAS Abram's half-sister.  In those days, there was no biblical prohibition against marrying a close relative.  It was later, through God's Law, delivered through Moses and the Levites, that such prohibitions were issued. (See Leviticus 18:16-18 and 20:17-21.) Their mutual father was Terah.   \{Additionally, Nahor, Abraham's brother, married their niece.}  Technically, Terah was father of both Abram and Sarai, although they had different mothers.  (Genesis 20:12)
These two incidents where Abram lied reveal a faltering, unsteady faith in God, His purposes, His will, His protection.  Y'all, Abram did not pop out of his mother's womb with this great, laudable faith.  It was forged in the furnace of hardship.

There are only two women mentioned by name in "the roll call of faith".  That is what I've often heard Hebrews 11 called.  Such a beautiful and heart-breaking chapter!  Guess who one of them was?  Guess whose husband was also commended?


8 By faith Abraham obeyed when he was called to go out to the place which he would receive as an inheritance. And he went out, not knowing where he was going. 9 By faith he dwelt in the land of promise as in a foreign country, dwelling in tents with Isaac and Jacob, the heirs with him of the same promise; 10 for he waited for the city which has foundations, whose builder and maker is God.
11 By faith Sarah herself also received strength to conceive seed, and she bore a child when she was past the age, because she judged Him faithful who had promised.
Here are some facts about this remarkable woman:
1.  She is first mentioned in Scripture (Genesis 11:29) living in a land called Ur, which most scholars place in southern Mesopotamia, near the Euphrates River.  This would be modern day southern Iraq or Kuwait.
2.  Ur was an incredibly wealthy city of that day; it is reasonable to conclude that Terah also was rather wealthy, as well as his sons.
3.  Abram and Sarai left Ur as relatively young people, at the urging of Terah.  Ur was also a highly pagan society, where the moon god was widely worshipped. Perhaps Terah wanted to move his family to more pure surroundings.  Abram was nine generations descended from Shem, Noah's son.  The fact that Abram knew and followed Jehovah God indicates that knowledge of Yahweh had flowed through that family line since the Great Flood. Other contemporaries of Abram (Job and Melchizedek {Gen. 14:18} ) indicate that true followers of Yahweh were scattered throughout the general region of the Middle East.
4.  (Gen. 11:13) Terah went with them on the first leg of this journey.  After about 650 miles they temporarily lived at Haran, until Terah's death. Speculation is that he was unable to journey farther.  It is not recorded exactly how long they stayed there.
5.  At age 65 (Abram was 75), Sarai again left all that she knew to follow her husband on the remainder of the 1000-mile journey across the desert to the land of Canaan.  They left because they both worshipped Yahweh, who had given them the command to go, along with a tremendous promise (Gen. 12:1-3).  Even considering that people lived much longer than we do, in those days, this was still quite a physical and emotional challenge for a woman of 65.  Yet, Sarai respected and obeyed her husband.

5 For this is the way the holy women of the past who put their hope in God used to adorn themselves. They submitted themselves to their own husbands, 6 like Sarah, who obeyed Abraham and called him her lord. You are her daughters if you do what is right and do not give way to fear.
1 Peter 3:5-6 (NIV)
See also Genesis 18:12, where we indeed find Sarah addressing Abraham as "lord".
6.  Despite her obvious beauty, her marriage to a prophet (Genesis 20:7) and being a woman of great wealth, Sarai/Sarah lived with a deep, all-consuming grief over her barrenness.  For approximately 60 years, she had tried to conceive with her husband, to no avail.  She had heard of God promising and reiterating His promise to Abram/Abraham no less than 3 times (Gen. 12:3, 13:16 and 15:1-6)!
7.  By the time Sarai/Sarah was 75, she had made a trip to Egypt, as mentioned above, and returned with her husband to the area of Bethel, a fertile land of many springs.  Sarai/Sarah, however, continued to be infertile.  She had heard from Abram the promise of God (Gen. 12:2-3)  to her husband ten years earlier (note that the promise was not to her, but to her husband); and, accordingly, she determined to step into the role of God.  Let's have a personal moment of silent reflection....
Can any of us women unequivocally declare that we would have done any different?  This foolhardy ploy was the greatest mistake of her life, one that she would regret for the rest of her days. (Don't miss, though, that Abram agreed to this ill-hatched {pardon the pun} plan!  Both had sagging faith.)

Now Sarai, Abram’s wife, had borne him no children. But she had an Egyptian slavenamed Hagar; 2 so she said to Abram, “The Lord has kept me from having children. Go, sleep with my slave; perhaps I can build a family through her.”
Abram agreed to what Sarai said. 3 So after Abram had been living in Canaan ten years,Sarai his wife took her Egyptian slave Hagar and gave her to her husband to be his wife.
Gen. 16:1-3
{Polygamy was never God's design.  Genesis 16:3 is the first recorded instance of polygamy involving a righteous man.  It was a poor example that Abram set for his descendants, one which was later seen with Jacob (Leah and Rachel), David (Michal, Abigail, Bathsheba, etc.), Solomon (1000 wives/concubines!) and has carried on in the Ishmael branch of the Abrahamic line to this day.}


Except the Lord build the house, they labor in vain that build it.
Psalm 127:1
8.  In spite of this strategic error and gross lapse of faith Sarai/Sarah is mentioned in "the roll call of faith".   Why?  Because even after all the debacle with Hagar and Ishmael, Sarai/Sarah still judged God to be faithful in His promises.  It was only in this, the 4th reiteration of God's promise to the couple, that God specifically included Sarai/Sarah in the promise.  Prior to this....listen now....she was only taking Abram's word that "God said so".  Think about the implications of that!  I marvel at how she trusted her husband.
It was at this time, in Genesis 17, that God gave the couple their covenant names:  Abram ("exalted father") to Abraham ("father of many") and Sarai ("princess") to Sarah ("mother of nations").
9.  We find in Genesis 18:1-15 that El Shaddai (the new name Jehovah God revealed to Abraham in Gen. 17:1) appeared to Abraham a 5th time.  It was at this appearing He gave a timeline to the promise (18:10).  And, it seems He visited with the express purpose of allowing Sarah to hear this promise personally since He asked (rhetorically) where Sarah was.  Sarah was listening to the conversation, behind a fold of the tent.
What are we to make of the fact that Sarah laughed when she overheard El Shaddai (which means "all-sufficient, all-powerful God {El}"?)  Who can blame her?  I certainly do not.
Her laughter was replaced by fear as she realized that God Himself was sitting under her tree, eating her food.  How did she know this?  She had not laughed aloud, only to herself.  Yet, God had heard her, and said so (18:15).  This so terrified Sarah that she lied about having laughed to herself.
10.  Despite it all, we see that Sarah had a sense of humor about how God had dealt with her.  When Isaac was born, she obediently (and bemusedly, most likely) named him "Laughter".  That is what the name Isaac means, in Hebrew.

6 Sarah said, “God has brought me laughter, and everyone who hears about this will laugh with me.” 7 And she added, “Who would have said to Abraham that Sarah would nurse children? Yet I have borne him a son in his old age.”
Genesis 21:6-7
11.  The last time we see Sarah mentioned in Genesis, she makes a demand of her husband that is rooted in her deep faith in God's promise to Isaac.  Sarah demands that Hagar and her son, Ishmael, who was at that time about 16 years old, be sent away.  Things had come to a head when the family was celebrating Isaac being weaned.  Isaac would have been a 2-3 year old toddler at this time. Ishmael made the serious error of ridiculing Isaac.  This action caused Sarah to realize that Ishmael's continued presence would continue to be a threat to God's purpose for Isaac.  God affirmed her actions in Gen. 21:12.  Furthermore, neither Ishmael nor Hagar was utterly abandoned by God. Some type of family ties did remain, as we discover both sons burying their father in Gen. 25:9-10.

So, we see both a great woman of faith and also of great flaws.  The hallmarks of her character were her submissive obedience to her husband, her faith in God's promises and her sense of humor.
Can you relate to Sarah's struggles of faith?  I can, and her story gives me hope.
Sources:
MacArthur, John. "Sarah: Hoping Against Hope." Twelve Extraordinary Women: How God Shaped Women of the Bible and What He Wants to Do with You. Nashville, TN: Nelson, 2005. 27-50. Print.
http://www.bible-history.com/geography/ur_of_chaldees.html
https://www.biblegateway.com/resources/all-women-bible/Sarah-Sarai-Sara
http://www.myredeemerlives.com/namesofgod/el-shaddai.html
Posted by Gena Hood at 5:52 AM