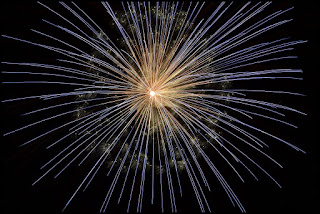 Today is Independence Day in my country, the United States of America.  My favorite thing to do on this day is enjoy fireworks displays.  It is so exciting to sit there as darkness falls, waiting for that first burst of gorgeous light.  Why is it we enjoy fireworks so?  We even refer to the kindling between a man and a woman as "fireworks".  Why?  I have some ideas about that.

In today's Genesis post (#9), we are going to explore the first created thing mentioned in the Genesis account:  Light.  Here's Genesis 1:3 - -

From Genesis 1:2, recall that there was darkness, emptiness and waters, with the Spirit of God moving over all of that.  As God came onto the scene, He created light.  This light emanated from Him.  It was a visible manifestation of the Triune God's very nature.  It was not light from any physical heavenly body.  Those lights - - the sun, the stars, planets, etc., were created later.  This light sprang forth from God Himself.  What fireworks those must have been!

When God created light as His first creation, I believe this created thing embodied both those attributes.

You know, when some people enter the room, they bring a certain presence with them.  Have you ever felt that?  It can be either a transcendent, luminous, glorious presence; or, it can be more of a malevolent sort.  When God came on scene in Genesis 1:1, He expressed Himself onto the formless void by creating light, because He IS Light.

The apostle John loved to emphasize this attribute of the Godhead and also of the Christian walk.  See 1 John 1:5 - -


God is Light, and in Him is no darkness at all.

Therefore, it is inescapable that when God began His creative process those thousands of years ago, He first birthed into His creation His essence: Light.

When you love someone, you bring light into his or her life. "Fireworks!" That's what God did for us.
If you will recall, there was a spectacular light show the night Jesus was born.  The witnesses were the shepherds, watching their flocks in the field.  Do you think it was an accident Jesus was born in the "dead of night", and that as He was born, light burst forth onto the scene?  The German composer, Johann Rist, penned this truth so beautifully!

Break forth, O beauteous heavenly light,and usher in the morning; O shepherds, shrink not with affright,but hear the angel’s warning. This child, now weak in infancy,our confidence and joy shall be, the power of Satan breaking,our peace eternal making.

So, where God is, there cannot help but be light.

But wait a minute - - -
If you will recall one of my recent posts from Proverbs, Solomon claimed that Wisdom (or Truth) was the first created thing.  Consider these verses from Proverbs 8 - -


22“The LORD possessedb me at the beginning of his work,cthe first of his acts of old.23Ages ago I was set up,at the first, before the beginning of the earth.24When there were no depths I was brought forth,when there were no springs abounding with water.25Before the mountains had been shaped,before the hills, I was brought forth,26before he had made the earth with its fields,or the first of the dust of the world.27When he established the heavens, I was there;when he drew a circle on the face of the deep,28when he made firm the skies above,when he establishedd the fountains of the deep,29when he assigned to the sea its limit,so that the waters might not transgress his command,when he marked out the foundations of the earth,30then I was beside him, like a master workman,and I was daily hise delight,rejoicing before him always,31rejoicing in his inhabited worldand delighting in the children of man.

Wisdom is another attribute of our Triune God, the Godhead so called.  Although God's speaking forth Wisdom is not explicitly mentioned in Genesis 1, there is no indiction from Solomon that Proverbs 8 could be taken as allegorical or merely "poetic".  As you have no doubt discovered, the Bible is not necessarily laid out in a linear, progressive fashion verse after verse, which is why it is so complex.  The whole of God's Word altogether paints the most complete picture.  Even so, I don't fully understand where Wisdom fits into the Genesis Creation Story; but, that's ok.  We don't have to fully understand every detail of God's work - - can't, actually.  Moving on.... ;)

Truth and Light.  In His initial creation of the heavens and the earth, God gave us a picture of how He would redeem the world, by sending His Son as the Light of the World.  The apostle Paul recognized this and declared the following in 2 Corinthians 4:6 - -


For God, who said, “Let light shine out of darkness,” has shone in our hearts to give the light of the knowledge of the glory of God in the face of Jesus Christ.

Isn't that beautiful and glorious?!

As God's divine light invaded the dark nothingness on Day One of creation, so His divine light is the only remedy for the sinner's dark, lost, empty soul.  The soul without Jesus Christ dwells in spiritual deadness and darkness, hopeless chained in sin, unable to effect our own redemption.  In the midst of that hopeless state, God's Son bursts forth!  By grace, we can receive light and life, God's own Son, as we believe in Him through faith.

Not only that, His mighty power can transform the filthiest soul into men and women "of whom the world is not worthy" (Hebrews 11:38 and Daniel 12:3).1

So, when you watch fireworks today or this weekend or whenever you see them, remember God's beautiful creation of light, both in Genesis and in your own soul.  And, if you have not yet embraced Jesus as Savior, what better day than today?  May today be your own personal Independence Day, your Eternal Peace Day!2

"The power of Satan breaking
Our peace eternal making." 3

3    https://www.umcdiscipleship.org/resources/history-of-hymns-break-forth-o-beauteous-heavenly-light
Posted by Gena Hood at 10:17 AM