This afternoon, my sister and I left my mother's house.  We spent a large part of "Boxing Day", December 26th, visiting, talking, laughing, eating and getting into various mishaps.  While at mother's, I stayed in one of her guest rooms, the one in which Hubster and I (or, in this case, just I) always stay.  Ironically, it was never my bedroom as a child but was instead my brother's and then later, my sister's.


And she brought forth her firstborn son, and wrapped him in swaddling clothes, and laid him in a manger; because there was no room for them in the inn.
Luke 2:7 (KJV)

We had a very merry Christmas.  I had wanted to blog on Luke 2:7 yesterday, but got off my trajectory due to all the family celebration.  Late last night, after everyone had gone to bed I watched a couple of Christmas videos on YouTube.  One was by Nabeel Qureshi, who made the point that "the inn" was actually likely not an inn at all, but was instead the home of a relative.  The Greek word Luke used was only used by one other person, Jesus, in the New Testament.  In those other two occasions (Mark 14:14 and Luke 22:11) where the word is used, it κατάλυμα (kataluma) was translated "guest chambers" or "guest room."  So, in actuality, a more accurate rendering of the story would be like:  "Mary and Joseph went to Bethlehem for the census and had planned to stay with relatives, but all the guest rooms were taken.  The only place available was the stable, which is where they ended up, and where Jesus was born."

One thing of which I'm sure - - - there is no part of the Bible IN the Bible by accident.  What does it matter whether it was stranger (an innkeeper) or a relative who had no room for the little family? Why is this detail even important?  It is one thing for a merchant to tell you that there is "no vacancy" or that the last faddish toy of the season has been sold.  It is another to be treated shabbily by family members.

At a Christmas Eve party I was listening to friends discuss sleeping arrangements for that night and the next few.  The three adult children and their children were on the way.  There was never any talk of putting anyone into the "unfinished basement" or "the garage".  (They had no stable.) . I guarantee you that the homeowners would have given up their own bedroom before that occurred!

Yet, here we have this very, very pregnant, first-time about-to-be mother, a frightened teenager, and her slightly less young, probably bewildered husband, who were relegated to the family's stable for the night.

How do most decent people treat guests?  We warmly welcome them and give to them our best, right?  The guest room is usually pristine and clean, smells good and is very comfortable.  We want our guests to feel valued and respected.  Even...loved!

It was a not-so-warm welcome from the family of man to the Savior, wasn't it?  Not a lot of hospitality from the very ones He created and then became one of, in order to save. 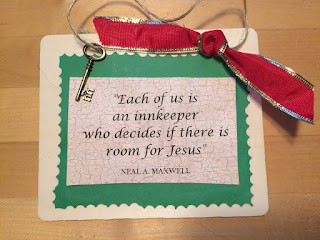 My little friend, Wyatt, made this ornament in his Christian school, shortly before Christmas.  The message is so important as we wind down from Christmas and head into the new year.  Quite a while back I heard a preacher say that if Jesus is not Lord OF all, then He is not Lord AT all.  What that preacher meant was that Jesus doesn't want to reside merely in a guest room of our spiritual house, but that he wants to permeate all the rooms of our "house".  While that is true, I dislike the statement he made because it sets up an almost impossible standard, especially for those who are considering following Jesus, who are contemplating inviting Him in.  It is a warning that nearly says, "you must be perfect to become a Christian or to follow Christ."  Some will respond, "Well, just forget it then!" Most of us have a drawer or closet in their "house" they would prefer Jesus just keep His nose out of, thank you very much!  We adore the concept of total Lordship, although the consistent practice of it is quite a challenge.

I'm more concerned about those who refuse to let Jesus into their houses at all, those who are like the relatives in Luke 2:7, sending the "infant holy" to the stable.  If we welcome Him into our "guest room", then follow Him by giving Him our best, He then leads us into deeper devotion to Him.  He gently shows us how to let Him become Lord of all our house.  The most urgent question, the one which must be answered first, is this:  "Is there room for Him AT all?"

Innkeepers, I hope each one of you has answered or will answer "yes".