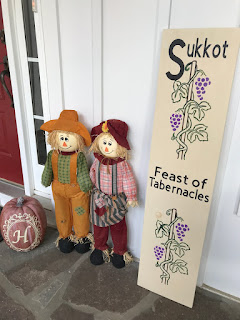 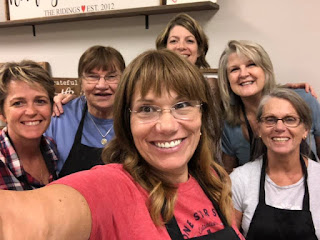 Last month I accepted an invitation to a "painting party" with these fine ladies.  We were to paint porch "boards", and I chose the theme of Sukkot, (due to the graciousness of Nona, who gave up her template for me).  Making the board, I pondered the fact that I was not terribly knowledgeable of this festival.  But, I had a lot of fun doing it!

Today is 18 Tishri 5780 on the Jewish calendar, which means we are in the week of the Feast of Tabernacles, also called the Feast of Booths, also called Sukkot.  It lasts from 15 Tishri through 22 Tishri, with the last day being called "The Eighth Day" (Shemini Atzeret).  What is the significance of this 8-day feast in both the first advent of Christ as well as in bible prophecy?  Let’s explore that today.

The Feast of Sukkot, like the feast of Unleavened Bread, is primarily a festival celebrated in the Jewish home.  The feast, or festival, commemorates those days when the Hebrew people wandered in the wilderness of Sinai, dwelling in tents or booths, temporary dwellings called, in Hebrew, “sukkot”. Many of you readers are familiar with this story.  In commemoration, many practicing Jews and Hebraic Christians today construct temporary shelters (called sukkot) and sort of "live in" them (eating meals, entertaining guests) for the week of Sukkot. (The singular of "sukkot" is "sukkah".)

Here are some relevant scripture passages:

We are told that it was at this feast that Solomon dedicated the First Temple (the one God allowed him to build).  (2 Chronicles 5:3) For this reason, one of the names for Sukkot is Feast of Dedication.

Nehemiah 8:13-18 shows the Israelites re-instituting this festival, after their return from Babylon.

Zechariah 14:9 and 16-19 foretells a future celebration of this festival by people from every nation on earth, during the Lord's Millennial Reign on Earth.
Some theologians believe this feast will manifest in the future as follows - -
1.  Marriage Supper of the Lamb (Rev. 19) in Heaven (Tishri 7-21), and then
2.  Jesus Christ's 2nd coming with His saints, to occur on "the 8th day", 22 Tishri (at the end of Sukkot).  The feast of Sukkot portrays both the Millennial reign of Christ and the eternity afterwards.
In Rev. 21, after the millennial reign and the Great White Throne Judgment, the New Heavens and New Earth will be revealed.   The fullness of God will be among as, because God will be "tabernacling" among us.  Paul referred to this as "eye hath not seen, nor ear heard" (1 Corinthians 2:9)... we cannot even begin to imagine.

So, in contemporary practice, the feast of Sukkot is "party time", a time of happiness and rejoicing at the goodness of the Lord.  An additional name for Sukkot is The Season of Our Joy (Z'man Simchateinu).

The other six festivals center on the people of Israel alone, but this one includes the other nations of the world. (See Deuteronomy 16 passage at end of post.) Sukkot portrays that day when King Jesus will "tabernacle" with men and rule the world.  During Sukkot, there were 70 sacrifices offered, one to represent the "70 nations" the Jews believed made up the rest of the world.

Since Jesus and His disciples kept all of the Jewish feasts, being observant Jewish men, there are some interesting parallels in the gospels, concerning Sukkot, which Jesus and His disciples observed/kept.  For instance, in the Courtyard of the Women (a section of the Temple) four huge brazier lights were placed on high poles, giving light during the night, and earning this festival the Feast of Lights.  (Yes, Chanukah, another dedication feast, borrows liturgically from Sukkot...)  As a result, the three main peaks of ancient Jerusalem (Mount of Olives, Mount Moriah, Mount Zion) were "lit up like a Christmas tree", you might say, even at night.  In between the Mount of Olives and Mount Moriah lies the Kidron Valley, which houses the largest Jewish cemetery in the world.  Another name for this valley was "the shadow of death" (see Psalm 23 and Isaiah 9:1.)


The people that walked in darkness have seen a great light;
they that dwelled in the land of the shadow of death, on them has the light shined.
Isaiah 9:1

Another important Temple rite of Jesus' era was the Water Pouring Ceremony, called Beit haShoevah (House of the Water Pouring).  Every day, during Sukkot, Temple priests performed three coordinated functions:
1.  Certain priests prepared the animal sacrifices laid out in Leviticus 23.
2.  Other priests went out and cut large tree branches (25 feet in length), which they placed on their shoulders and waved back and forth in a prescribed pattern as they processed in unison back toward the city.   The tree branches were of four varieties: willow (which has no smell and no fruit), citrus (has scent and bears fruit ), myrtle (has fragrance, no fruit ) and palm (no smell, has fruit).  Could Jesus' parable of the types of soil, in Matthew 13, have reminded the people of the trees used in this ritual?
3.  The High Priest would go with a third group of priests to the Pool of Siloam and retrieve a vase of Mayim Hayim (which means Living Waters).
As the group with the tree branches processed back to the city, so did the group that had gone to the Pool.  This was accompanied by the music of the shofar and the flute.  The group with the animals ascended to the altar and placed them on the fire as the group with tree branches encircled the base of the altar, leaning their cut saplings against the base to form a sukkah over the top of the altar.  Simultaneously, the High Priest ascended to the altar and poured the Mayim Hayim along with wine at the altar.  All during this ceremony, the assembled people sang a song based on Isaiah 12:3.


"Therefore with joy shall you draw water out of the wells of salvation."

Now, why did I tell you all that?

In looking at John 7, we see that Jesus was in Jerusalem to celebrate this feast.  Sukkot was one of the three "mandatory" feasts, where every Jewish male was required to go to Jerusalem for the keeping of it.  The other two were Pesach (Passover) and Shavuot (Pentecost or "Weeks") Watch His words spoken on 22 Tishri, in verse 37:


37On the last and greatest day of the feast, Jesus stood up and called out in a loud voice, “If anyone is thirsty, let him come to Me and drink. 38Whoever believes in Me, as the Scripture has said: ‘Streams of living water will flow from within him.’” 39He was speaking about the Spirit, whom those who believed in Him were later to receive. For the Spirit had not yet been given, because Jesus had not yet been glorified.

Do you think He said this in the Temple as the people were rejoicing at the Water Pouring Ceremony?
Did you catch the reference to Living Water?
The very next day, according to John 8:12, Jesus proclaimed Himself the "Light of the World", in fulfillment of Isaiah 9:1.  Perhaps this was said on 23 Tishri, as the large light poles were being taken down?

I've been pondering with amazement and bemusement the fact that my local Baptist church is celebrating Sukkot without even realizing it.
Like the ancient Hebrews, our congregation is currently a people with no "permanent temple".  Each Sunday, we construct our "tabernacle", our church "tent", when we move our worship items into a local elementary school early on Sunday mornings; and then we move them out again in the early afternoon.  But this Sunday, on Tishri 21, we will hold a celebratory service in a huge tent as we  tabernacle with God on the land He so miraculously provided.  And, we will rejoice, yes, we will party in the season of our joy, celebrating the funds He has (again) miraculously provided for the construction of our eventual "temple".


14And you shall rejoice in your feast—you, your sons and daughters, your menservants and maidservants, and the Levite, as well as the foreigner, the fatherless, and the widows among you.
15For seven days you shall celebrate a feast for the LORD your God in the place He will choose, because the LORD your God will bless you in all your produce and in all the work of your hands, so that your joy will be complete.
Deuteronomy 16:14-15 (BSB)

Good, J. (1998). Rosh HaShanah and the Messianic Kingdom to come: an interpretation of the Feast of Trumpets based upon ancient sources. Nederland, TX: Hatikva