The Worst Weather Ever 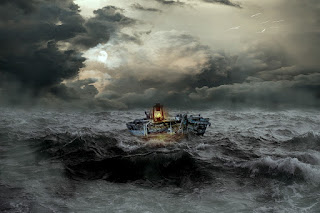 Image by Myriams-Fotos from Pixabay

Upon waking this morning, I nearly stepped on our 90-pound dog, Charlie.  He usually sleeps on his dog bed, across the bedroom.  But, when it rains (yes, just pure, old rain) or (God forbid) thunders, he gets as close to me as possible, shivering and shaking in fear.  Apparently, during the night, he came to my side of the bed...and when I found him his head was literally under it.  For a moment, I thought he was dead!

Throughout Scripture, we can find some awful geographic and atmospheric phenomena.  Examples:  the Earth opened up and swallowed an entire family (Numbers 26:10); fire and brimstone fell to the Earth and destroyed two cities, Sodom and Gomorrah (Genesis 19); plagues of frogs in Egypt ( Exodus 7:25-8:15); the future hordes of "locusts" (Revelation 9, the Fifth Trumpet judgment).
But, the granddaddy of them all had to be the "weather" brought to bear upon the Ark, surely one of the best-built ships ever made: God-designed and God-protected.

The occupants were on the boat for just over a year.  Don't make the mistake of believing all they endured was "hard rain".  No, the Bible tells us that the very springs (fountains) of "the deep" were opened and then later restored.  In this process, there were cataclysmic earthquakes, violently tossing the Ark to and fro.  Historians tell us that, before the Great Flood, what we now know as the seven continents were more joined together into something called Pangaea (or Pangea, whichever spelling you'd prefer).  This was a "supercontinent", comprising most of the land of the whole earth.

Back in 2004, there was a tremendous earthquake in the Indian Ocean, near Indonesia, on Boxing Day, Dec. 26th.1  The resulting tsunami from this powerful quake killed over 100,000 people, in mere moments.  Now, imagine the worldwide earthquakes and tsunamis needed to break the supercontinent into seven, spreading them out around the globe.

Girls and boys, that must have been some boat ride.  It would have made the fiercest carnival attraction look tame.

But, then afterwards, what to do with all that water?  God sent strong, strong winds to dry up the Earth.  Honestly, I am convinced that, had not God supernaturally held them, the occupants of the Ark would have died from abject fear.

We read in Genesis 8:1 that "God remembered".  He remembered the humans and animals on His Ark.  This seems to indicate He had forgotten about them for some time which is, of course, ludicrous.  But, the tenor of this verse is that He cared for them, with lovingkindness, through it all, because He remembered His covenant promises to His people.2  What promise is relevant in this case?
At this time in human history, we have had the Adamic Covenant (Genesis 1:27-28) and the protevangelium, also called the first mention of Messiah.  We find it in Genesis 3:15.  Here, God promised to send a Messiah to redeem fallen man.  Obviously, by Noah's time, no Messiah had appeared.  Therefore, God preserved a remnant family through whose descendants Messiah would eventually come.  Even more relevant, God promised to keep Noah (Noahic Covenant) and his family safe through all the "bad weather" (Genesis 6:17-18).  And, He did, despite the awful ordeal.

There are times in our lives when we believe we are going through the very worst, living as a human can bring.  Our adverse circumstances can cause us to doubt the very existence of a Heavenly Father, much less whether or not He even sees our pain.  In the depths of despair we may give up hope that the Lord will remember His promises to us.  Yet, we must hold fast, because though it seems to us that he is slow to fulfill His Word, He always does and does so at exactly the right time.


9The Lord is not slow to fulfill his promise as some count slowness, but is patient toward you,a not wishing that any should perish, but that all should reach repentance.
2 Peter 3:9 (ESV)

So ... don't be like Charlie.  When the torrential rains come, look up and remember God's promises to you.  Don't hide your head under the bed or shake with fear.  Trust His promises.  They will never, ever be moved, like the tectonic plates that moved to split the Earth's land into the 7 continents.  Nor will His promises or His care ever be removed from His own beloved.

2    https://www.ligonier.org/learn/devotionals/god-remembered-noah/
Posted by Gena Hood at 9:02 AM