Oh my goodness....what a day!  The emphasis today was on ministering to ministries that reach out to Muslims.  For most of the day, we were in territory to which Jews are denied access.

This morning, we headed up to Jericho.  It's not overly far from Jerusalem.  On the way, we stopped at the traditional site of the Good Samaritan story.  We did not enter the museum, but had a time of worship and scripture reading there on the grounds (and made pictures, of course!) 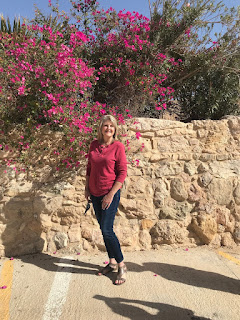 Next, we stopped at a roadside stand to allow any party members to ride a camel (those that wished to), to allow for souvenir shopping and treat procurement.  Several of our group are huge fans of Magnum ice cream bars.  Somehow, though I've not had one in months, I got roped into this cray pic!

Arriving in Jericho around 10:00, we met an amazing man named Tass Saada, who is an Arab evangelical Christian.  Now...Arab Christians are a minority in Israel.  But, evangelical Arab Christians are even more rare here.  Tass' testimony is amazing.  You can read about it in his autobiography called, "Once an Arafat Man".  I'm not going to tell you much about it, except to say Tass was saved in young-middle age, after he had made a very successful career as a restauranteur in America.  Now, he lives in Jericho and ---
God used him to do all of this in territory that is controlled by the Palestinian Authority (which is highly Muslim).  I wish you could have heard all the miracles that God worked, to lead him to where he serves today. 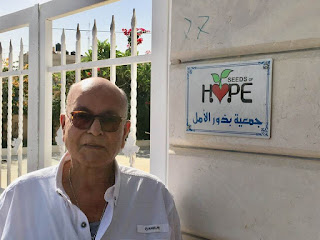 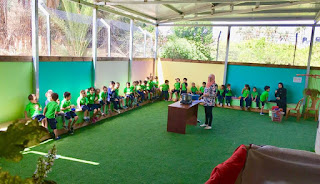 I have to tell you a funny about the title of his book.  A member of our team who shall go unnamed heard the title and thought it was "Once an Arab Fat Man".  We have laughed and laughed over that one!
Tass related that, although he is very circumspect in his actions, he is friends with the most powerful Muslim Imam in Jericho.  As you read about these faith heroes who are sharing the gospel in the most hostile of environments, you will hear a couple of key themes.  One is that they look for common ground with the "enemies" of our faith, living out the admonition from Jesus to "love your enemies.  Bless those who curse and spitefully use you." (Matthew 5:43-44)  Another is that they build relationships and that they "love one another".  It's just pretty amazing!
The children at Tass' school were amazing.  They are pictured above.  Someone had donated a camera and tripod, which the ministry had needed for a year and a half.  Our group brought it to the school.  The director was so thrilled!  These children are educated in English and are taught core values, using Chick-fil-A materials that have been adapted for the culture.  And, they and their families are respected and loved.  If you would be interested in sponsoring a child's education for a year, go to seedsofhope.org.

We ate lunch in Tass' restaurant and then some of us bought his book.  I have already started reading it.  He is friends with another Israeli man I greatly admire, Joel Rosenberg, who wrote the foreword for his first book!  Another thing I'm learning is that the evangelical Christian community and Messianic communities in Israel are very connected.  Years ago, the man who had served as an aide to Bibi Netanyahu met the former aide to Yassar Arafat and hugged each other, because they both shared a common bond - - their dedication to, and worship of, Jesus Christ as Savior.  Stunning!  I never cease to be amazed by my Lord.

From Jericho, we returned to Jerusalem and had ourselves a wild goose chase.  We were searching East Jerusalem for a Muslim women's safe house, run by evangelical Arab Christians.  Problem was...no one seemed to be able to find it.  Now, think about it - - a safe house for battered women?  The whole idea is for certain people to not be able to find it.  Regardless, it took probably 30 extra minutes to find the place, which is in the Beit Hanina neighborhood of East Jerusalem.  When we did, what a blessing we received!

It is called Al Wahaa, which is Arabic for The Oasis.  The director is Layali Khouri, a lovely young wife and mother who is actually a Baptist, living in Ramallah.  (You have heard of Ramallah, haven't you? It is under the control of the Palestinian Authority and is a place of significant political unrest. I have never been there, nor would I go.  Just as I won't go to Gaza or to the Golan Heights.)  At any rate, a Baptist in Ramallah?  Wonders never cease!  Here is a picture of both Layali (R) and her "right hand", Rita (L).  Rita spent her early years in Chicago, but has now lived in Israel longer than she lived in the States. 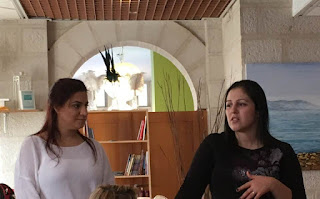 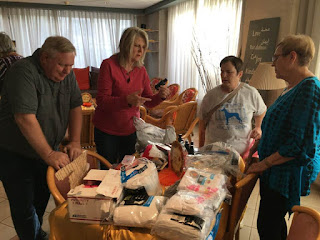 When we entered Al Wahaa, it immediately felt like a sanctuary.  It smelled divine, and had a peaceful air about it. We brought in the many comfort items we had with us.  In the picture below, I was discovering that some of the bottles of conditioner had leaked onto the bottles of nail polish and....what to do?  Well, we worked it out, never fear!  The ladies served us both dessert and drink, which is a hallmark of Arabic culture.  And, note: it is considered rude to demure and to refuse the host's hospitality.

The center provides a place for moms to bring their children, if they wish, but also to escape bad home situations, if needed.  Bible studies are held there and other support is provided.  Again, the emphasis is on building trust and establishing relationships. The Al Wahaa we visited was in the larger Jerusalem area, but there is also one located in Ramalla.  You can reach this ministry through their Facebook pages: Al Wahaa Jerusalem or Al Wahaa Ramallah.

After leaving Al Wahaa, we were pretty tired.  In fact, after returning to the hotel, I did not go with the group to dinner, choosing to retire to the room. But, OH!  How beautiful to get just a glimpse of how the gospel of Jesus is being spread in the Muslim world, in areas we look at as being closed to the gospel message!  Our God's plan is perfect, and He is on the move!
Posted by Gena Hood at 12:50 PM