On a Starry Night 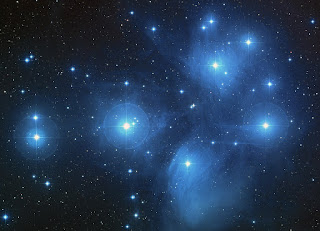 For whatever the reason, I can vividly remember as a young child being fascinated with the heavens at night.  My paternal grandmother, Granny Weezie, used to take me outside on bright, moonlit nights and would say, "I see the moon.  The moon sees me.  God bless the moon and God bless me."  The picture at the top of this post is of The Pleiades, otherwise known as The Seven Sisters, one of my favorite constellations.  There is a free app you can get on your mobile device now called "Skyview". When the app is on, you can aim your phone in any direction and the app will, after computing your location, show you what the sky looks like anywhere, even on the other side of our planet!  Amazing.

I imagine the tranquil shepherds "abiding in the fields" were similarly mesmerized by the night sky. Night after night, they watched the crawl of constellations from east to west, as simultaneously, they guarded their sheep flocks.  The ripping of the veil separating Heaven from Earth on the night of Christ's birth was something they never anticipated.

Perhaps some of them gazed up at the stars and wondered the same thing as the little boy who wandered into the school office, only to be met by a very high counter over which he could not see. Stretching his hands up over the edge he asked, "Is anybody up there?"  Do you suppose the shepherds wondered the same?

After the angels' announcement on the night of Jesus' birth, the shepherds had no doubt!  The unavoidable reality of God exploded across the night sky.  Damning the consequences, they hurriedly left their flocks unattended in the fields, in order to go see this miracle which had come to pass.

Have you ever received something you felt you truly didn't deserve?  Perhaps it was a second chance. Perhaps it was someone's favor.  Don't you know those shepherds wondered why an angel, followed by many more messengers from God's angel army, appeared to them?  Why them?

Perhaps the answer is in the angel's message (Luke 2:10 NIV)


10But the angel said to them, “Do not be afraid. I bring you good news that will cause great joy for all the people.

ALL the people....The angels did not appear to a king or even to rich men.  They appeared to those people on the lowest rungs of society's ladder.  Do you think our all-wise God's choice of them was any accident?

We are all equally unworthy of the grace of God, the gift of God, that first Gift of Christmas. Reading the story of the shepherds none of us can say, "Oh, well, God's salvation is only for 'the deserving', the successful, the smart, the wealthy."  His grace was announced to the most lowly so that all of us can know for certain His matchless Gift came for ALL people, even us.

In the New Testament Greek, the beautiful word "euangelizomai" (εὐαγγελίζομαι) is rendered into English as "I bring good news"!