Our Pioneer and Trail Boss 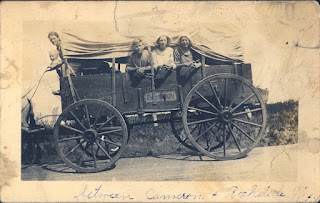 When you hear the term "pioneer", what comes to mind?  Maybe you think of The Oregon Trail, the westward expansion that greatly multiplied the geographical area of these United States.  Maybe you think of a scientist who discovers a radical new process or who uncovers a mystery of the universe previously hidden.  Maybe, like me, you start to hear the Star Trek theme in your head.  "To bold go where no one has gone before..."

Nabeel Qureshi's current best-seller, No God but One: Allah or Jesus, has been mentioned in my blog before.  In reading, I've learned a great deal about the Muslim faith from Nabeel, who was steeped in it from his childhood.

One of the things that Muslims assert as a pillar of their faith is that Jesus did not die on the cross. There are a couple of theories they use to explain their position.  One, you may have heard of.  It's called The Swoon Theory.  Essentially, it says that Jesus merely lost consciousness, or went into a coma, while on the cross, mimicking death.  The other theory is a little more far-out. It claims that Satan disguised another man by putting Jesus' face on him, so that people believed it was Jesus who died, although it was not.

9But we see him who for a little while was made lower than the angels, namely Jesus, crowned with glory and honor because of the suffering of death, so that by the grace of God he might taste death for everyone.
10For it was fitting that he, for whom and by whom all things exist, in bringing many sons to glory, should make the founder of their salvation perfect through suffering.
The pastor of Hebrews plainly states that Jesus died.  He "tasted death for everyone".  Cockerill reminds us that the importance of Jesus' death cannot be overemphasized.  Paul says the same, in 1 Corinthians 15, where he adds the dimension of the importance of Jesus' resurrection.  (Obviously, a death is necessary for a resurrection!)

Verse 10 reminds us that Jesus' death was no mere death, but rather the most heinous, violent and torturous death available to the people of that day.  Jesus did not just die - - - He suffered incredibly as He died. The pastor of Hebrews makes the point that it is through His obedient suffering, which culminated in His death, that He became the Pioneer.

What are the various layers of meaning to that term, our Pioneer?
1.   Jesus was the only God-Man, the only flesh-born human to live a sinless life.
2.   Jesus, through His example, left a powerful example of obedience, endurance and triumph for us beleaguered redeemed sinners to follow.  Remember, this letter/sermon was addressed to the blood-bought people of God, not to the world in general.  When we are called upon to suffer for our faith, we are only further cementing and legitimizing our identification as God's sons and daughters.  (See Hebrews 12.)
3.   Jesus, through His resurrection, was "the firstborn from the dead".  In other words, the same God-directed resurrection power that raised Jesus Christ from the dead is at work in the lives of those who bear His name.  And, ultimately, it will raise our bodies (no matter their physical state) from the dead on that great resurrection day of which only God knows the date and hour.   This is our destiny as Jesus Christ's spiritual offspring, His children.

Maybe you are someone else's "pioneer".  Think about that for a moment.  Whether you are a Christian or not, I'll bet there is someone who looks to you....for support, for guidance, as an example. What kind of pioneer are you?  What kind do you want to be?

I don't know about you but, even as a Christ-lover and Christ-follower, I often feel inadequate.  Does that surprise you?  Did you think that Jesus was a magic pill who made everything easy and allright? If anything, following Jesus makes me increasingly aware of my own inadequacies, my own propensity to screw things up, to fall on my face, UNLESS I am keeping my eyes firmly fixed on My Pioneer and (this is the secret) leaning on Him for guidance, wisdom and strength.  As a Christian, I KNOW I am hopeless as a goat when I try to power through in my own strength.

Probably no one reading this has ever been part of a wagon train.  But, do you know what the first rule of the wagon train was?  It was to respect the authority and leadership of the Trail Boss.  As long as I do that, I can then be the best "pioneer" to others who look to me as possible.  And, I can find rest for my soul in that.  Praise God!

Lord Jesus, thank you for "pioneering" on my behalf and on the behalf of all who will make You their "trail boss".  Thank you for suffering for me, dying for me, rising from the dead for me, being my example for this earthly life and for the promise of my future resurrection.  I love You and worship You with all my heart.  In Jesus' name, amen.
Posted by Gena Hood at 8:35 AM